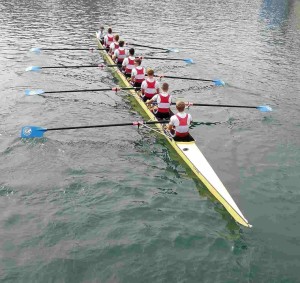 Rowing machines or ‘ergs’ are mainly classed on the type of resistance it offered. And there are four main types of rowing machines air, hydraulic, water and magnetic.

An indoor rower works when you pull out the handle and slide back on the machine. In starting phase the resistance is set on low to row faster and with ease. Gradually increasing the resistance tend to require harder muscle work with a slow stroke rate and a harder pull.

Sometimes it gets harder to take a decision when it comes to choosing the best-suited type of rowing machine. So I decided to cover a post on this.

You should consider reading the benefits of using a rowing machine.

The resistance is measured by a tachometer on the basis of acceleration and deceleration of the flywheel, which is given by the moment of inertia. Air Resistance models are used by many sports rowers and also the best selling rowing machine Concept2 Model D is air resistance type.

If you really want to replicate the feeling of outdoor rowing on a river then this type of indoor rower is the best choice for you. Because the resistance is produced by the paddled water in an enclosed tank. The mass and drag of moving water generated the resistance for the machine and the user. The faster you row the more you generate resistance.

The water rowing machines are quite popular than the other types but still there is a downside of this type is itself the need of water, which make it heavy and unportable.

But this makes it less accurate because sometimes the user adjusts the bars on a distinct length which may lead to off combination. That is why this type of rowing machines are priced much lower.

In this type, the resistance is generated by electromagnets which make its functioning silent and more compact than water and air rowers. But there is also a downside of this type.

The resistance is generated by electromagnets so the resistance remains constant whether you row fast or slow which is not the actual simulation of real rowing, where resistance increases with the pace. But still, magnetic rowing machines are one of the widely used type of rowing machines especially in homes because of their portability and silent working.

I hope you find this post helpful and ready to make the perfect purchase of your first rowing machine. I personally recommend you to go for the best selling air type Concept2 Model D machine. You can also find the full comparison table of rowing machines here.

RowingFeed.com is a participant in the Amazon Services LLC Associates Program, an affiliate advertising program designed to provide a means for sites to earn advertising fees by advertising and linking to amazon.com. Amazon, the Amazon logo, AmazonSupply, and the AmazonSupply logo are trademarks of Amazon.com, Inc. or its affiliates.

Scroll back to top